I went home for my 40th high school reunion this past week but it wasn’t that gathering that brought me face to face with my past self.

The building I went to high school in is long gone so there were no “in person” trips down that particular memory lane. However, the university I attended is thriving so one day I spent a few hours wandering around the campus. The memories came fast and furious and nostalgia abounded.

Songs often bring back strong memories but in this room, the printmaking room, it was the smell that instantly made me feel like I was 18 years old again.  The minute I walked through the doors I remembered the exact feeling I had when I first entered it for a woodcut class in 1977. The exact same smells are still there.  The ghost of my former self lingers there, big time. I’m positive my 18-year-old butt sat on those very same stools.

Considering I was a photography major, one would think the photo lab would have been where I encountered my younger self but this room full of computers did nothing to bring back the memory of the community darkroom it used to be. The smell of fixer and stop bath no longer permeates this space and the sound of the print washer is no longer a constant background noise from the next room.  I can’t help but think that the photo students of today are missing out.

The campus of Northern Kentucky University looks nothing now like it did 36 years ago.  Back then it was the fledgling gathering of a few buildings.  In May of 1973 the school awarded it’s first Bachelor’s Degree;  I earned mine in 1980.  My first classes were held in barns and the first darkrooms I used were in the basement of a house.

The Fine Arts Building opened in 1977, among a concrete jungle of buildings perched on a hill.  The campus was surrounded by farmland but on the campus itself hardly a tree was in sight, the only bit of nature being a small pond behind the building which we  referred to as Lake Inferior.

In contrast, this is what the campus looks like today.  While I might think the photo lab is diminished in it’s progress, I think the opposite is true of the rest of the campus now.  Trees are mature, ivy covers the Fine Arts Building and plants have softened the place where I came of age. In the background of one of these photos you can see that Lake Inferior is no longer inferior.

I would be remiss if I left this post without also visiting the drawing rooms and the student studios on the fourth floor.  Except for the paintings on the walls, the addition of some storage shelves and the decades of paint on the easels,  the rooms are largely unchanged. 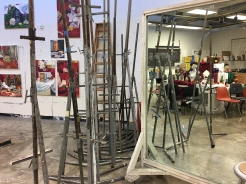 I certainly can’t say the same thing for me.

Who is that lady with the gray hair?

She certainly isn’t the 17-year-old art student who very timidly walked onto this campus for the first time in the fall of 1976.