It’s Just A Matter Of Time

When I traveled to Virginia last week to see my new grandson I was delighted to find this scene outside the window of my hotel room in Alexandria. 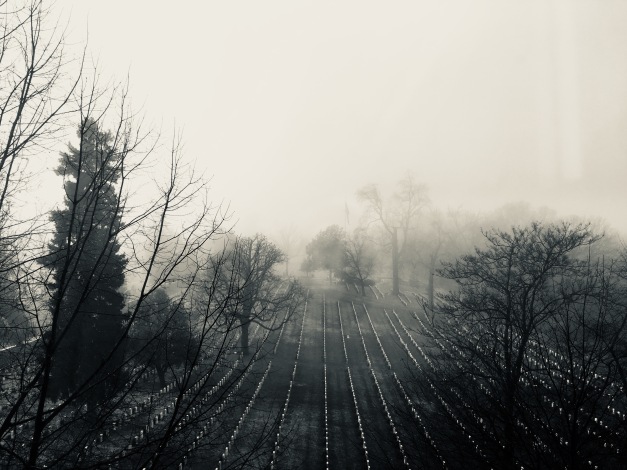 I’m pretty sure one of my first photo shoots back in 1976 when I was a freshman in college was in a cemetery.  I still hold a fascination for them….for the serenity I find there, for the untold stories of the people interred on the grounds, and visually, for the beauty that happens to stone and memorials when time has weathered them.

A bonus, on the first morning I was there, was the fog that shrouded this cemetery, adding yet another aspect of  “weathering” to my experience.

END_OF_DOCUMENT_TOKEN_TO_BE_REPLACED

I’ve been in my hometown this week, taking lots of pictures, many of them with this week’s photo challenge in mind, but with no real direction of where this post would end up.

I pretty sure it’s going to end up all over the place.

My mother would have been 92 this month and since I’m not often in the town she and Dad were laid to rest in, I visited their graves on her birthday.  They owned plots in a Catholic cemetery in Cincinnati for as long as I could remember and when we visited other family members there they would often point out the location of where they would be buried. Decades later, after one of her brother’s funerals, Mom decided she didn’t want to be put into the ground so my parents sold those plots and opted to be put into a mausoleum.

In some really odd way the ground shifted for me when they made that decision and at their funerals, nothing seemed right.  Instead of the traditional (at least in my mind) ceremony of the family gathering at the gravesite and the casket being lowered, we gathered in the cemetery chapel after their funeral masses for another service and then walked away. Somehow there was not the same finality.  At least not the finality I had always envisioned.

Apparently Mom’s point of view changed as she approached her own death and this was no longer acceptable.

To my surprise I finally understood how Mom felt and my own personal point of view changed on this sort of mini pilgrimage.  I spent a fairly long time wandering around that cemetery on two different days and although it’s a well cared for establishment, many of the markers were overgrown and hard to find.  Not so with the mausoleum, which was easy to locate and well maintained.  Instead of looking down at a set of graves my eyes were drawn up to a single plaque with their names on it.  Light was all around them.

I was uplifted and filled with peace.

And now for a huge shift in direction.  Since we’re also talking about Dad may I add that he was a huge Cincinnati Red’s fan?  He was.  He instilled a love for the team in me, and the two of us then helped that along in my oldest son.  He grew up on military bases and has never lived in Cincinnati but he has always loved the team, so we came from different cities to attend a game this week at the Great American Ballpark.  I was still thinking about unusual points of view while I was there so this next photo essay is a more literal interpretation of this week’s photo challenge.

I believe I felt just as close to Dad in that stadium as I felt to Mom at the mausoleum on her birthday.  It’s all about a point of view.

Boy, when you’re dead, they really fix you up.  I hope to hell when I do die somebody has sense enough to just dump me in the river or something.  Anything except sticking me in a goddam cemetery.  People coming and putting a bunch of flowers on your stomach on Sunday, and all that crap.  Who wants flowers when you’re dead?  Nobody.

What Holden Caulfield failed to understand is that the flowers aren’t for the dead, they’re for the living. 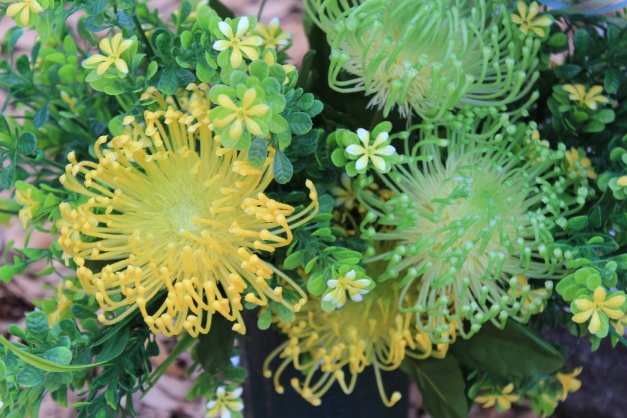 The flowers, the memorial, the dinner after, the condolences posted to the funeral home website, the memories shared on Facebook….these are all for the living.  They’re all ways in which those of us left behind find comfort.

I first met Sandy  & Kevin Clifford in 1982 when Jim was assigned to Wurtsmith Air Force Base in Michigan.  Jim was a 1st Lieutenant and Kevin was a Captain.  We were relatively new to the Air Force life and the Cliffords were seasoned and worldly;  they ran with the “older” crowd.  Sandy was one of my first exposures to a Southern Belle.  She was from Louisiana and had a deep accent that was exotic to my Yankee hearing.  She played bridge, could throw a wicked bowling ball, had a hearty and infectious laugh, smoked cigarettes, and drank bourbon.  I was in awe of her.

Years later we found ourselves living in the same neighborhood in Abilene, TX.  When we arrived in town she immediately took me under her wing and taught me all there was to know about the city.  Before we knew it, a friendship was born.  Our sons were constant companions, we were both active members of the spouses’ club, our families started celebrating holidays together, and many a summer day was spent at the base pool while our kids swam.

By then I was living in DC.  I didn’t attend her funeral.  I chose, instead, to visit her while she was still living.  During that week I drove her to San Antonio for a chemo treatment.  I still remember how much we laughed on that trip.  She kept telling me to not worry about the speed limit, as she had the whole “cancer patient” persona down pat and no cop would dare ticket me once she took off her turban, exposed that gorgeous bald head, and started throwing up.  It was so typical of her to take a reality that sucked and find the humor.

For three and a half years I’ve lived in the town she’s buried in.  I finally visited her grave this week.

Sandy became a grandma for the first time on January 15th.  I wanted to be with her.  I wanted to physically commemorate her grandson’s entrance into this world.  I left flowers on her grave.  I did it for me and for her daughter, who lost a mother when she was just a preteen.  For a daughter who would give anything to be able to see her mama hold her grandchild.

And I took pictures because the word “beyond” has been on my mind all week. When I visit a cemetery I usually spend quite a lot of time thinking of what is beyond.

I went back three days in a row, looking for the perfect light and time of day, which I never really found.  But I did a lot of “beyond” thinking and a lot of wondering about all the families and the stories contained in this particular cemetery.

You are still remembered and missed my friend.

Someday those of us still walking around cemeteries will find out lies beyond.  You already know. And yes, I can still hear your laugh.