Dorothy Had It Right

I find myself traveling a lot in this season of my life and although I love being in new places and experiencing new things, it always comes down to this….

After living out of a suitcase, and being in a car or in airplanes for hours on end, there’s no place I’d rather be.

Home is where my center is.

Although none of them has ever lived at this particular address and two of my three sons and their families have yet to see the house in person, this is where I’ve gathered all their photos.

END_OF_DOCUMENT_TOKEN_TO_BE_REPLACED

Like many houses throughout the world, my home has been undergoing a transformation this past week.  I’ve not pulled out all my Christmas decorations in several years due to travel and putting a house on the market but this year we’re settled in our new house and our grandchildren will be here so no surface is safe!

All of it makes me smile….remembering my mom….who used to put red velvet bows everywhere she could.  We used to joke that it was entirely possible for Dad to wake up from falling asleep in his recliner, paper still open and unread in his lap, to find a bow taped to his forehead.

END_OF_DOCUMENT_TOKEN_TO_BE_REPLACED

This is the home I grew up in.  My father was born in this house, and lived in it for most of his life.  I lived in it until the day I got married.  Its walls witnessed a whole lot of joy and a whole lot of sorrow, the stories revealed to me as I grew up.  The Crosby family grew deep roots at 4273 Clifford Road in Cincinnati, OH.  I knew exactly where I came from, the environment that formed me, and everywhere I went were people who knew me from the day I was conceived.  “Home” for me, will always be Cincinnati. 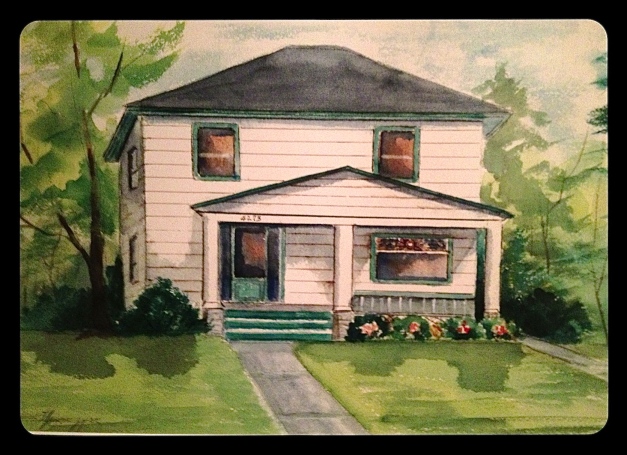 Since the day I walked down those front steps, dressed in white, and went to the church to marry, I’ve had 24 different addresses.  Jim was an ROTC cadet in 1977 and neither of us had any clue what our military life would be like.  We certainly couldn’t predict how many times a moving van would arrive to pack up everything we owned. Over time home has taken on a whole new meaning.

Over the years I stopped being sentimental about the houses.  Every one of them held special memories but leaving them wasn’t hard, it was just a fact of military life.  When we are living in them they are home, but as soon as they are empty they are just houses.

Somewhere along the way we developed a tradition we refer to as The Empty House Toast.  Once the moving van pulls away we gather a few friends together in the empty house and offer it a toast, thanking it for its shelter and the memories we gathered while living there.

Military families are fond of saying “home is where the heart is.”  I think my youngest son said it best.  When he was 13 someone asked him where he was from and without skipping a beat he said, “I’m from wherever my stuff is.”  Wise words from one so young because home, to us, isn’t about the four walls, it’s about the objects we’ve acquired in all the places we live and the way we put them together within those walls to reconstruct, again and again, the place we call home.  The house itself, the neighborhood, the stores, the streets….they may not be familiar but our “stuff” is.

To this day, I stand by my belief that this is why I have such a hard time throwing things away.  It’s not junk, it’s home!

Okay, I might have to admit that when Jim’s command is finished and we have to leave this gorgeous historical home, I might be just a little sentimental…..