Bending With The Wind

For a year and a half I’ve paused at this tree next to this creek bank in these Virginia woods, wondering when it was finally going to fall, what storm would prove to be too much for an ancient root system, which wind gust would push it over.  I’ve also wondered about its history.  How long has it been standing here, how many birds has it harbored in nests, how many generations of children have attempted to climb it?  Has a rope every been tied to its branches so children could swing out over the water?  How many winters has it been covered in snow?  How many springs saw it leaf out into a cacophony of brilliant new green leaves?

The trees here grow very tall and very strong.  They tower above me for as far as I can see, testimonies to strength and the ability to weather many storms and weather conditions.  For decades on end they go from seed to sapling to mature trees, the strongest among them bending with the wind, firmly rooted in the soil beneath them.

Sometime in the few weeks since I last walked this trail that final wind gust came along or perhaps the day simply came when nothing was left to hold it up anymore.  I like to think that it went down in a mighty gust of wind, with all the noise and fanfare it deserved on its final journey back into the ground it emerged from as a tiny sprout.

Although it now lies fallen, it still speaks loud and clear about all the years it stood, tall and resilient to nature’s forces.

END_OF_DOCUMENT_TOKEN_TO_BE_REPLACED

Lessons From Tangled and Broken Rosaries

One of the beautiful things about our Catholic faith is the rituals.  Masses are familiar no matter where we go.  We all partake in the same sacraments.  Prayers are universal.

I learned the Glory Be, the Hail Mary and the Our Father at a very young age and often said the rosary when I was in grade school. Unfortunately, for years, okay….decades, I didn’t think about it.  I suspect I thought I didn’t need it, that it was an old and outdated method of prayer.

As I grew older a few things happened in my life that literally brought me to my knees and in those instances I returned to a foundation that although ignored, had remained solid beneath me.  I rediscovered the rosary, this time in the form of the Chaplet of Divine Mercy.

Why this particular devotion?  Because it’s based on visions reported by Saint Mary Faustina Kowalska (1905-1938), known as “the Apostle of Mercy.”  She was a Polish sister of the Congregation of the Sisters of Our Lady of Mercy and canonized as a Catholic saint in 2000.  She’s a Kowalski, I married into the Kowalski family.  How could I go wrong?

I don’t pray the chaplet lightly.  I pray it for intentions nearest and dearest to my heart.  And I believe those prayers have been answered.

These days I have to admit to multi-tasking when I pray the chaplet.  Right after I put the leash on our black Lab I plug myself into an instrumental channel on Pandora on my iPhone and grab a rosary as I head out for fresh air and time away from distractions at home.  There are a few intentions I say the chaplet on a continual daily basis for, the third intention changes and is added when needed, for a nine-day stretch.  The rosary helps me keep count of the prayers as I walk.

The repetition of the prayers brings calm to my heart and over time that repetition has become a prayer in itself.  A person can’t keep up that kind of praying without finally listening to the words.  The words can’t be said that often without somewhat of an understanding.

Lately my rosary has needed a few repairs.  It often swings from my hand as I’m being pulled by an 85 pound dog and occasionally gets tangled in his retractable leash.  I’ve repaired the one that holds a relic of Sister Faustina more times than I can count.  Once I dropped it altogether, thinking it was safe in my pocket, and had to retrace my steps to find it.  Today another rosary became a casualty when it got tangled for the second time in a matter of minutes and I didn’t stop to fix it, resulting in a more permanent break and a lost section. 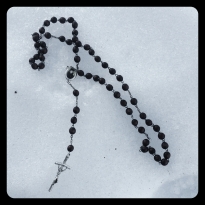 This week has been a rough one for extended family and a close friend.  It has brought into focus the idea that sometimes all we can do is pray. To keep in mind that we’re not in control but there is someone who is.   Someone who has a plan and a reason for what happens in our lives.

Every once in a while I’m tempted to ask for a sign of God’s presence, usually when my faith is weak.  I don’t usually get that sign.  Today He put it right smack in the middle of my day as I walked through a parking lot.  I’m not in control.

I might have to keep praying about my acceptance of that.  It’s seems to be an ongoing process.